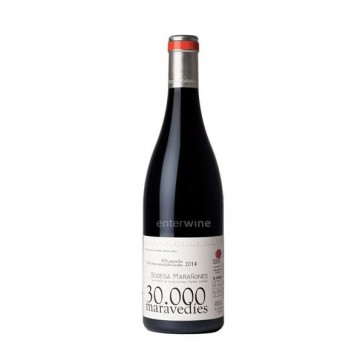 This is the new vintage of 30.000 Maravedíes (formerly known as Treinta mil Maravedíes), a red wine crafted by Bodega Marañones following the guidelines of organic farming.

Belonging to the Vinos de Madrid Designation of Origin, this wine is produced in the midst of the Gredos Mountains, a region that has been defined as Spain's biggest discovery since Priorat by some influential wine critics.

This wine is a blend of 90% Grenache grapes, coming from 30 to 70 year old vines grown in granite soils, and 10% mixture of Morenillo and other indigenous varieties.

Harvested by hand, the grapes were partially destemmed, cold-soaked, and fermented in 3,000 and 4,500-litre vats.

After that, the wine underwent malolactic fermentation and was aged for a period of 8 months in new and used French oak barrels, as well as in 45-hectolitre vats.

Finally, 30.000 Maravedíes 2017 was aged for a further two months prior to its commercial release.

Aerate this Garnacha de Gredos some time before drinking.

Additional Information
Additional Information
Reviews
4 Reviews
Tasty Spanish wine
Value
Suggests aromas of red berries with a subtle spicy note and herbs. A tasty Spanish wine.
Review by Peter Scocht (Posted on 31 March 2021)
maravedies
Value
Medium body, light and streamlined. A very good wine.
Review by Nono (Posted on 30 October 2018)
Madrid
Value
This wine gets better with each vintage. Winery is seriously fine-tuning it, and it is a great value.
Review by Noe (Posted on 5 February 2018)
Sense títol
Value
wine with well defined identity, with soft and tender tannins, that seduce trough their sent and color.
Review by Geremy L. (Posted on 31 May 2016)
Write a review
This websites use cookies. By continuing to browse the site you are agreeing to our use of cookies.
Accept More information