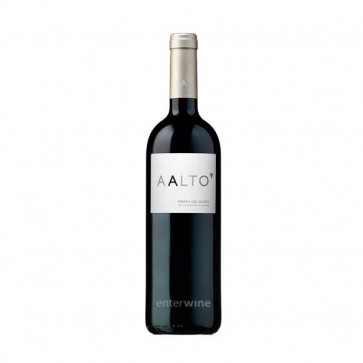 This is the new vintage of Aalto, one the best, most prestigious Spanish red wines produced in Ribera del Duero.

Crafted by winemaker Mariano García, this single varietal Tinta Fina is made from old-vines with ages ranging from 40 to over 100 years old.

Harvest was carried out manually. After a meticulous selection that took place both in the vineyard and in the cellar, the grapes were separately vinified according to their plot of origin.

Alcoholic fermentation and maceration took place inside truncated cone-shaped stainless steel vats. After that, the best wine musts were transferred into 50% new and 50% used French and American oak barrels, where malolactic fermentation was completed.

Finally, Aalto 2017, produced by Bodegas y Viñedos Aalto,was aged for 16 months in those barrels. Bottled in July 2019, it was aged for a minimum of 2 months in the bottle before its release.

We suggest that you decant this red wine from Ribera del Duero a minimum of 1 hour before drinking.

Incidentally, this reserve red wine will improve for many years in the bottle.

great aalto
I've always considered this to be one of Spain's great wines. Flawlessly precise with immense natural power, it will live for decades to come. Review by ESP (Posted on 24/10/2018)
aalto
Iron fist in a satin glove. Amazing complexity and structure. Lots of potential. Review by Claude (Posted on 11/06/2018)
aalto
In a word: world-class. Maybe not yet. But it will sure be in 5-10 years. Review by Edison de Witt (Posted on 18/01/2018)