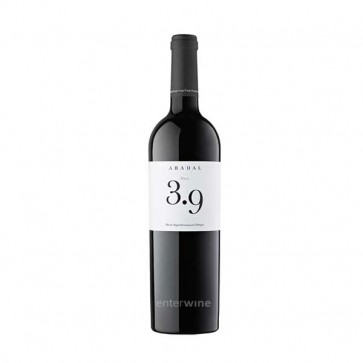 Located right in the heart of Catalonia, the Pla de Bages DO is a long-forgotten, re-emerging wine region that in the late years has produced increasingly interesting wines thanks to the sustained work of wineries such as Bodegas Abadal, the producer of this Spanish red wine.

Made from a blend of 85% Cabernet Sauvignon and 15% Syrah, Abadal 3.9 is a single estate wine coming from a very special vineyard, surrounded by dense forests and  red clay soils which give the wine a particular character.

The grapes were harvested by hand and went through two selection processes, one in the vineyard and the other one in the cellar. Vinified separately, both musts fermented and were macerated with the solid cap of skins to extract colour and aromas.

The ageing process was complex, as it was carried out in six different types of wooden barrels which, in turn, had three different toast levels. 70% of them were French oak barrels, while the remaining 30% were American oak barrels. Aged for 12 months, Abadal 3.9 2015 was finally blended and aged for a further 12 months in the cellar before its release.

We recommend that you decant this reserve red wine wine 1 hour before you drink it.

Properly stored, this red wine from Pla de Bages will improve in the bottle over the next 5-7 years.

Additional Information
Additional Information
Reviews
1 Review
3.9
Value
A very serious wine. Profound and authentic.
Review by Suprised drinker (Posted on 25 July 2018)
Write a review
This websites use cookies. By continuing to browse the site you are agreeing to our use of cookies.
Accept More information