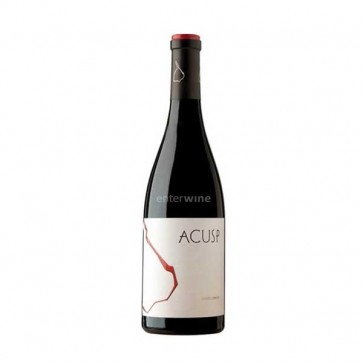 A high-altitude, single varietal Pinot Noir coming from vines planted at an altitude of 1,000 metres above sea level in the mountainous Catalan region of Costers del Segre, near the French border? Indeed, Acusp is all this, and much more.

Most importantly, this Spanish red wine was crafted by Raül Bobet, one of the most accomplished winemakers in the world.

Moreover, this wine was vinified in an interesting manner. Harvested by hand and meticulously selected, the Pinot grapes were brought to the cellar and then divided into two parts. The first part was fermented and macerated in stainless steel tanks. The second part was fermented in open-air stone vats dating back from the 12th century, when they were dug in the ground and hewn by the Medieval monks that inhabited the area.

Then the two wines were blended. After that, this Pinot Noir crafted by the Castell d'Encús winery was transferred into French oak barrels. There, it completed malolactic fermentation and was aged for 12 months.

We strongly suggest that you decant Acusp 2017, as it was neither filtered nor clarified in order to preserve its great purity.

Additional Information
Additional Information
Reviews
3 Reviews
ready, steady...
Value
Who would have guessed that Spain - excuse me, Catalonia - could produce a Pinot able to compete with those from NZ and Oregon? Well, this is it!!
Review by Start your engines (Posted on 20 December 2018)
acusp
Value
New Zealand and Burgundy meet in the Pyrenees foothills. This Pinot wino combines the best of two worlds.
Review by Pinot buff (Posted on 14 June 2018)
Pinot lover
Value
A super-classy, highly intellectual, almost cerebral red wine from the southern side of the Pyrenees. Delicate, spacious, amazingly pure. It has real potential for improvement.
Review by Skin deep (Posted on 24 October 2017)
Write a review
This websites use cookies. By continuing to browse the site you are agreeing to our use of cookies.
Accept More information