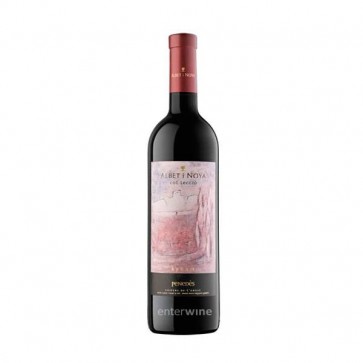 Produced by the Albet i Noya winery, which pioneered the use of organic farming in Penedès more than three decades ago, Albet i Noya Col·lecció Syrah is a single vineyard Spanish red wine.

It is made from 25-year-old Syrah vines planted at 360 metres, in a south-oriented vineyard located in Costers de Mediona, a place belonging to Costers de L'Anoia, a subzone of DO Penedès.

After that, this red wine from Penedès was transferred into 1st and 2nd year French and American oak barrels, where it was aged for 14 months.

Finally, as with Finca La Milana, one of the winery's flagship wines, Albet i Noya Col.lecció Syrah 2018 was only gently filtered, but neither clarified nor stabilized prior to its bottling.

Additional Information
Additional Information
Reviews
2 Reviews
Syrah
Value
The best thing about this wine is that it does not try to reinvent the wheel. No excentricities, but classicism at its best. Excellent fruit and good craftmanship.
Review by Old Ringo (Posted on 1 April 2019)
syrah
Value
Fully mature. No rough edges, the baby fat has gone away. Fresh and crisp, lots of flowers and terroir too.
Review by Mr. Discreet (Posted on 2 October 2018)
Write a review
This websites use cookies. By continuing to browse the site you are agreeing to our use of cookies.
Accept More information