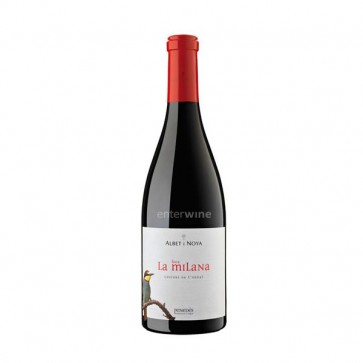 Coming from a single estate, called Finca La Milana, Albet i Noya Finca La Milana is a Spanish red wine produced at the very heart of the Penedès DO. Some of the vines were planted in 1870, thus being over 100 years of age.

The wine is a blend of  Tempranillo, Merlot and Caladoc-a crossing of Grenache and Malbec created in 1958.- The grapes come from 11 plots of south-oriented vineyards located at an altitude of 350 metres above sea level.

Separately harvested, the grapes were carefully selected and destemmed. Fermentation lasted 8 days, after which the wine was macerated for a period of 18 days.

Then this organic red wine was drawn off and transferred into French oak barrels, where it was aged for 18 months.

Finally, Albet i Noya Finca La Milana 2015, by the Albet i Noya winery, was neither stabilized nor clarified. To preserve its character, the wine was only delicately filtered before its bottling.

Production of only 10,000 bottles. Decant this red wine from Penedès a minimum of 1 hour before drinking.

great wine
A wine still in the making. Challenging, with plenty of information to ponder on. Review by Haydn (Posted on 05/02/2019)
milana
Serious red wine. Impressingly complex, some geeky varieties here I had never heard before. Super good. Review by Takeshi (Posted on 02/10/2018)