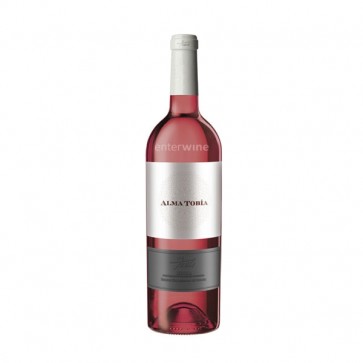 Interestingly, the Tobía winery was the first to produce a Spanish rosé wine fermented in oak in La Rioja.

It is made from a blend of Tempranillo and Maturana.  The first variety comes from two vineyards: one was planted in 1965 in the town of San Asensio, an area with an Atlantic microclimate; the other, organically farmed, is located at a higher altitude, in the town of Hornilla, and it has rocky soils.

As for Maturana, it comes from an organically farmed estate located at 650 metres of altitude, in an area with a harsh Continental climate.

Both varieties were harvested in October. Once in the cellar, the grapes were cold-soaked at a low temperature for 48 hours. Then the wine must was drawn off and transferred into new French oak barrels, where it was fermented and aged for 5 months with periodic stirrings

After that, Alma de Tobía Rosado Fermentado en Barrica 2018 was blended and bottled.

Additional Information
Additional Information
Reviews
1 Review
grown-up rosé
Value
This is way more than the usual pale, skinny rosé. Nice body, a touch of herbs and berries, and still very fresh. I enjoy this kind of rosé very much, because it pairs well with many kinds of food.
Review by Elianor 22 (Posted on 2 September 2017)
Write a review
This websites use cookies. By continuing to browse the site you are agreeing to our use of cookies.
Accept More information