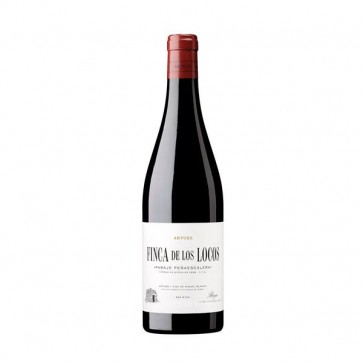 Produced by Bodegas y Viñedos Artuke, Artuke Finca de Los Locos is a Spanish red wine made from a blend of 80% Tempranillo and 20% Graciano.

The name of this single estate wine - meaning "the Mad Men Estate" - has an interesting story behind it. In 1950, the grandfather of Arturo and Kike de Miguel, the current owners of the Artuke winery, bought a estate at 550 metres above sea level. Located in an area of La Rioja in which no one had ever thought of planting vineyards, the locals said that the prospect was utter madness. That is how The Mad Men Estate was born.

At the beginning of the 80s, the first grapevines were planted in the Paraje Peñaescalera. After much hard work, the winemakers discovered that the quality of the wines that came from that plot was unparalleled in the region.

This remarkable Spanish red wine was vinified in a traditional manner. Meticulously harvested, the grapes were fermented in stainless steel tanks. After that, malolactic fermentation took place in 500-litre oak barrels, where the wine was also aged for over a period of 16 months.

Before its bottling, this red wine from Rioja was only delicately filtered.

Additional Information
Additional Information
Reviews
2 Reviews
locos
Value
Terrific Rioja. A wine with a great personality, really deep and fascinating.
Review by Locus amenus (Posted on 2 July 2018)
New rioja
Value
The "new" Rioja is beginning to produce some outstanding wines. This Finca Locos by Artuke is very pure, and it has a sort of straightforwardness and inner drive which, in contrast with the restrain of traditional Rioja, I find tremendously attractive. Oak is less present also, and the wine breathes freely. Superb!!
Review by Jimmy Delon (Posted on 23 October 2017)
Write a review
This websites use cookies. By continuing to browse the site you are agreeing to our use of cookies.
Accept More information