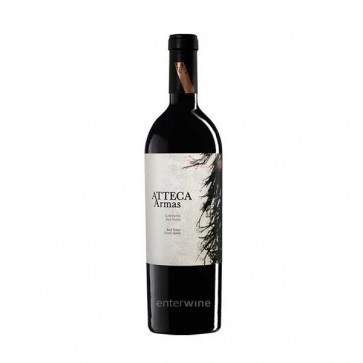 The impressive Atteca Armas aims to convey the utmost expression of the harsh, rugged terroir of the northern Spanish region of Calatayud.

A single varietal Grenache, this Spanish red wine is made from vineyards located between 750 and 1000 metres. They are very old vines, most over 100 years of age.

Soils are composed of slate, a feature that brings a distinctive complexity to this Grenache from Aragón.

Moreover, the plants have managed to withstand an unmerciful climate, with extremely cold winters and excruciatingly hot summers.

Produced by Bodega Ateca, this red wine from Calatayud was vinified with the utmost care.

After alcoholic fermentation, Atteca Armas 2017 was transferred into new French oak barrels, where it completed malolactic fermentation and was aged for 18 months.

Properly stored, this old-vines Grenache will improve in the bottle for many years

However, if you prefer to enjoy it right now - an understandable decision indeed - we suggest that you decant it for a minimum of 3 hours before you drink it.

Additional Information
Additional Information
Reviews
3 Reviews
tremendous wine
Value
A blast of a wine! Incredibly deep and concentrated.
Review by Sir John (Posted on 15 March 2019)
atteca
Value
Imposingly deep, shattering and earthy. Needs a good 3 hours in the carafe. Then it calms down and another conversation starts.
Review by Armas (Posted on 7 February 2019)
wine on arms
Value
Right now it is so intense it is almost frightening. Truly a red wine on steroids. Spine-tingling. I will store my two remaining bottles for some years.
Review by Zizou (Posted on 24 August 2017)
Write a review
This websites use cookies. By continuing to browse the site you are agreeing to our use of cookies.
Accept More information