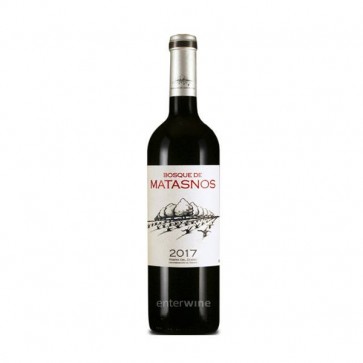 This is the new vintage of the remarkable Bosque de Matasnos from Ribera del Duero.

Produced by the Bosque de Matasnos winery, this Spanish red wine was crafted from a blend of Tempranillo, Merlot, Malbec and Grenache. The grapes come from old vines, most of which are over 60 years of age.

The 2017 vintage was one of the toughest in the last decades. A severe drought, complicated by an unmerciful frost, decimated the harvest. In the end, though, the surviving grapes proved to be of superior quality.

They were harvested by hand and meticulously selected. First on site, then twice in the cellar

After a cold maceration, this red wine from Ribera del Duero was fermented in stainless steel tanks. 10% of the wine underwent malolactic fermentation in new American oak barrels, and the rest in the tanks.

Then Bosque de Matasnos White Label was aged for 12 months in 90% French and 10% American oak barrels.

Additional Information
Additional Information
Reviews
1 Review
from Ribera de Duero
Value
Believe you me, this is some serious stuff!! Classy, deep and with room for growth. Smooth and at the same time super mineral.
Review by Excellent red wine (Posted on 9 January 2018)
Write a review
This websites use cookies. By continuing to browse the site you are agreeing to our use of cookies.
Accept More information