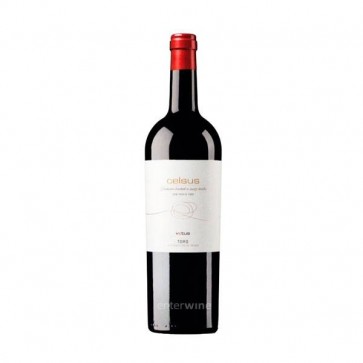 A single varietal Spanish red wine made in the DO Toro, Celsus is produced by the Bodegas Vetus winery, a branch of the Artevins Group (also owners of Finca Villacreces).

This wine is solely made from Tinta de Toro grapes, coming from Finca Camparrón, an estate planted with very old, ungrafted vineyards almost 100 years of age.

The vineyard is located at an altitude of 700 metres above sea level. Soils are mainly composed of sand and loam.

The grapes of this Crianza red wine were harvested by hand. Once in the cellar, they were carefully destemmed and fermented in 3,000-litre vats, after which the wine was subsequently transferred into new French oak barrels.

There, Celsus 2014 completed malolactic fermentation and was aged for a period of 14 months. Prior to its bottling, it was neither filtered nor clarified.

Decant this old-vines Tinta de Toro 1 hour before drinking. Drink up to 2028.

Additional Information
Additional Information
Reviews
1 Review
celsus
Value
Very deep, very pure, very intense. Violets and menthol, earth and chocolate. BBQ King.
Review by BBking (Posted on 15 March 2018)
Write a review
This websites use cookies. By continuing to browse the site you are agreeing to our use of cookies.
Accept More information