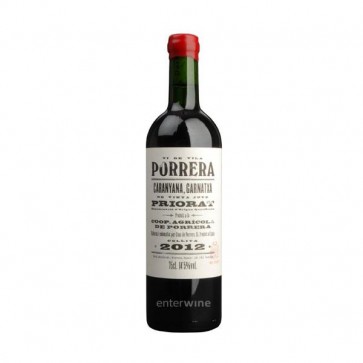 A sort of Priorat aristocracy, their members include the patriarch José Luis Pérez, founder of Mas Martinet, his daughter Sara Pérez, co-owner of Venus La Universal, and, finally, Marc & Adrià Pérez, cousins and makers of this wine, which some years ago substituted the legendary Solanes.

Terroir-orientated and meticulously crafted, this Spanish red wine is made from a traditional blend of Grenache and Carignan (locally known as Caranyana) coming from young vines.

According to the regulations of the DOQ Priorat, the name of this wine - "Porrera Vi de Vila" means "Village wine from Porrera" - guarantees that the grapes come solely from the village specified in the label.

Meticulously crafted, this red wine from Priorat was fermented and macerated at a controlled temperature, after which it was aged for 12 months in French oak barrels. Most significantly, Cims de Porrera Vi de Vila 2016 was aged for 3-4 years in the bottle before its release onto the market.

Additional Information
Additional Information
Reviews
1 Review
Porrera
Value
I bought this wine because I particularly enjoy wines that have spent some years in the bottle and are released at a mature stage. I was not disappointed. The heart and soul of Priorat.
Review by Priorat my love (Posted on 27 November 2017)
Write a review
This websites use cookies. By continuing to browse the site you are agreeing to our use of cookies.
Accept More information