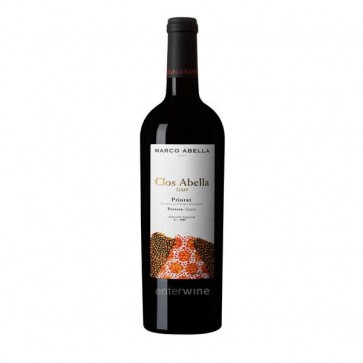 Red wine from Priorat, made from Carignan, Grenache and Cabernet S., and aged for 20 months in barrels.
Crianza. 20 Months in acacia wood barrels
Percentage of Alcohol: 15.5º
Bottle size: 1,5 l
D.O.: Priorat
Grapes Varieties: Cabernet Sauvignon, Carignan, Grenache Red,
Wineries: Marco Abella
ñ 91 94 93
Sign up to get notified when this product is back in stock

2009 will be remembered for many years in Priorat, as it was one of the best vintages of the last two decades.

Among the many exceptional wines that were produced that year, there's one that stands above the rest: Clos Abella 2009 Magnum. In January 2015, this wine was chosen Best Wine of the World 2014 by the Wine in China Magazine.

The wine was crafed by the increasingly prestigious Marco Abella winery from low-yielding vines 11 to 100 years of age planted in steep slopes. Those vineyards have the typical, black slate llicorella soils that bring the wines from Priorat a complexity and a mineral character matched by very few wines in the world.

As for the winery's farming practices, it is worth mentioning that all of Marco Abella's vineyards are grown following organic and biodynamic procedures.

The harvest of the grapes began in early September and went on until late November. The grapes were selected twice, first time at the vineyard and then in the cellar.

Separately vinified according to its variety and origin, the grapes were naturally fermented and macerated using indigenous yeasts.

Then, Clos Abella 2009 Magnum was aged for 20 months in 225 and 300-litre French oak barrels from five different cooperages.

Final blend of this great wine was: 50% Carignan, 39% Grenache and 11% Cabernet Sauvignon.

If you want to enjoy this wine now, we emphatically suggest that you decant it for a minimum of 1 hour.

However, the wine has a considerable ageing potential, and it will evolve beautifully in the bottle for 10 years.

Thanks to our special relationship with the Marco Abella winery, we are able to offer our customers Clos Abella 2009 in a Magnum bottle (1.5 litre).