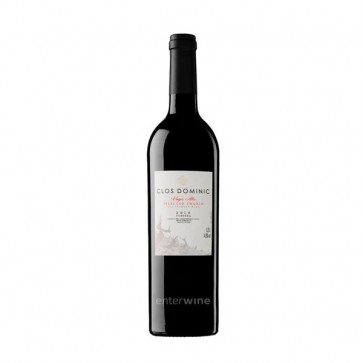 Red wine from Priorat made from old-vines Carignan and Grenache aged for 16 months in French oak barrels.

A remarkable wine from Priorat, Clos Dominic Vinyes Altes is made from centenary vineyards grown in the town of Porrera.

This high-end Spanish red wine is made from a traditional blend of Carignan and Grenache, the one that best expresses the dark, intriguing quality of the world-class Priorat soil.

The ancient vines are planted on steep slopes on the highest area (Vinyes Altes) of an estate called "La Tena." The soils are composed of decomposed slate (known in catalan as llicorella), and yield an extremely low quantity of 800 grams of fruit per plant.

Besides that, the Clos Dominic winery practices an environmentally friendly agriculture and follows a policy of minimal intervention, as far as the winemaking process is concerned.

Harvested by hand, the grapes were meticulously vinified and aged for 16 months in mostly new, and some used French oak barrels. The wine was only gently filtered prior to its bottling.

A wine with a considerable lifespan, we emphatically suggest that, if you desire to enjoy Clos Dominic Vinyes Altes 2016 now, you decant it for at least 3 hours before you drink it.

Properly stored, this red wine from Priorat will drink beautifully until 2033.

Top Priorat!!
Absolutely first-class Priorat, with a depth to die for. I don't give it 5 stars only because it is still too young. Review by Flanagan and Allen (Posted on 26/03/2019)
alt-dominic
This would be one of my last-meal wines. I mean, together with 5 o 6 more... Review by 2019 (Posted on 05/06/2018)
PriROARat
Thank God there is a winery who continues to produce their wines in a traditional way!! Unbelievably deep and mineral wine, at times literally heart-stopping. Marvelous. Review by Gimme (Posted on 09/01/2018)
altes
A full-blown, ultra-mineral Priorat. Deep and dark as the Mariana trench. Fa-bu-lous wine. Review by Python (Posted on 15/11/2017)