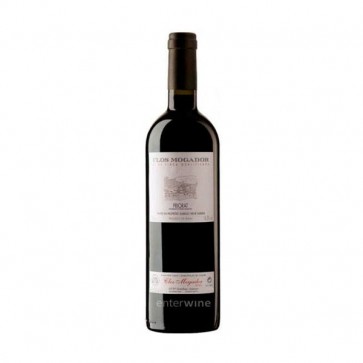 So, here it is. The new vintage of Clos Mogador. A wine that would be in any "100 wines you must try before you die" list worthy of that name.

The wine is crafted by the great René Barbier Sr. He is the man who, along with other pioneers such as Álvaro Palacios and Josep Lluís Pérez, had the wonderfully foolish idea of bringing Priorat back to life. No less than world-class wine region that was on the verge of complete oblivion two and a half decades ago.

An uncompromising, wild, terroir-oriented wine, Clos Mogador 2017 is made from a blend of Grenache, Carignan, Syrah and Cabernet Sauvignon. The grapes come from the 20 hectares of vineyards owned by the winery. They are located at an average altitude of 350 metres above sea level, on a natural amphitheatre made of the slate, llicorella soil that gives the wine its trademark, one-of-a-kind Priorat minerality.

Harvested at an optimal ripening state, the grapes were vinified in little vats and underwent a long period of skin maceration. Then this wine by the Clos Mogador winery was aged for 18 months, partly in 300-litre oak barrels and partly in a 2,000-litre oak tank.

If there is a wine that requires patience and deserves attention, this is it. So, we emphatically suggest that you decant this red wine from Priorat wine for at least 3 hours before you drink it. Longer decantations will greatly improve the wine.

Additional Information
Additional Information
Reviews
4 Reviews
epic
Value
One of the world's ultimate red wines, and the least snobbish one.
I raise my hat for you, Mr. Barbier.
Review by JL Austin (Posted on 22 March 2019)
mogador!!
Value
At this price, I would build a home cellar to store cases of Mogador in order to joyfully drink myself into old age.
Review by Young man (Posted on 18 December 2018)
by clos
Value
How could one find words to describe this beauty? I lack the ability. 6 stars.
Review by Astounded (Posted on 25 July 2018)
René the magician
Value
One of the wines of my life. Not only this. Every single vintage I've tasted of it.
Review by Mogador (Posted on 23 February 2018)
Write a review
This websites use cookies. By continuing to browse the site you are agreeing to our use of cookies.
Accept More information