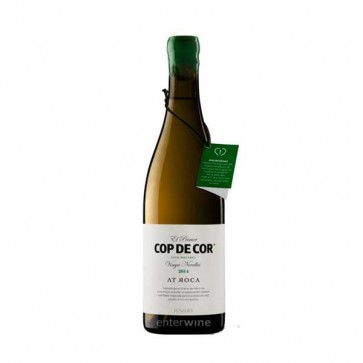 Organic white wine made from Macabeo in Penedès, fermented and aged for 8 months in barrels.
Barrel. 8 Months in French oak barrels from Allier
Bottle size: 75 cl
D.O.: Penedès
Mono-variety: Macabeo
Wineries: AT Roca
91 91
Sign up to get notified when this product is back in stock

Cop de Cor is a Catalan expression (very similar to the French "Coup de Coeur") used to design a sudden, immediately deep feeling of attraction towards something or someone, whether it be a person, a wine or a charitable cause.

Precisely, this Catalan white wine is produced with the collaboration of Vi per Vida, a non-profit organisation that collects money to help fund cancer research.

Cop de Cor 2014 is a single varietal Macabeo coming from a single plot composed of over 30-year-old vines grown in sandy-limestone soils.

The estate is farmed following the guidelines of organic agriculture.

Produced by the AT Roca winery, a portion the grapes were harvested, crushed and left on the ground protected by a cloth. Thus, the grapes were able to ferment spontaneously with the natural yeasts coming from the surrounding environment.

The second portion of the grapes were harvested at the end of September, pressed undestemmed and macerated for 5 hours. The next day they were destemmed and, together with the rest of the grapes, fermented and aged for 8 months in 300-litre French oak barrels.

Additional Information
Additional Information
Reviews
1 Review
unexpected
Value
Got this wine as a gift. I'm not very keen on Spanish - pardon me, Catalan - white wines, but this was different, so I decided to write this. It feels very pure and fresh, and after several hours it showed real complexity.
Review by Mercury Theatre (Posted on 13 February 2018)
Write a review
This websites use cookies. By continuing to browse the site you are agreeing to our use of cookies.
Accept More information