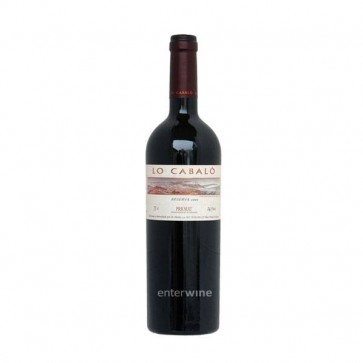 From our point of view, the only reason why the wine De Muller lo Cabaló is not better known is because, despite being a first-class Priorat, it is not produced by a "fancy" winery.

Made from grapes coming from the best plots owned by the De Muller winery, this Spanish red wine certainly speaks for itself.

The composition of this red wine from Priorat features four varieties: Grenache (75%), Merlot & Syrah (10% both), and Carignan (5%).

Harvested in late September, the grapes were macerated and fermented in stainless steel tanks.

After the completion of spontaneous malolactic fermentation, the wine was transferred into new French oak barrels, where it was aged for 15 months.

Finally, De Muller lo Cabaló 2015 was aged for 12 months in the cellar prior to its commercial release.

An age-worthy wine, it will drink beautifully over the next 8 years. Decant a minimum of 1 hour before drinking.

Additional Information
Additional Information
Reviews
2 Reviews
cabalon
Value
Surprising combination of old and modern-style Priorat. Super expressive fruit and yet very fresh, fabulous with a Christmas Turkey.
Review by Max Muller (Posted on 18 December 2018)
caballo
Value
An old-style Priorat with elegance, terroir and a great balance. Price is reasonable for me.
Review by Book keeper (Posted on 1 February 2018)
Write a review
This websites use cookies. By continuing to browse the site you are agreeing to our use of cookies.
Accept More information