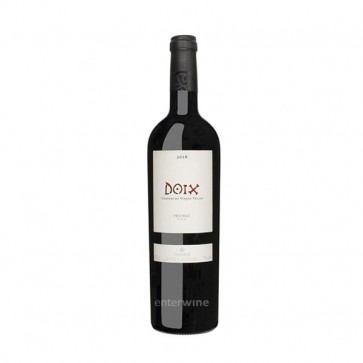 One of Priorat's most sought-after wines, Doix is remarkable for its elegance, ageing potential and finesse.

The 2016 vintage was one of the best of the last years in Priorat. The grapes ripened steadily and slowly, thus achieving optimal levels of acidity, alcohol and phenolic maturity.

As usual, this Spanish red wine is made from Carignan and Grenache grapevines 80 years old on average. Located 500 metres above sea level, because of its age the roots of the plants go deep into the harsh, telluric slate soil typical of Priorat. This gives this red wine from Priorat by Mas Doix a depth which very few wines are able to match.

The handpicked grapes were separately vinified. During alcoholic fermentation the cap was regularly submerged into the wine must so the wine could get colour, texture and flavour from the grape skins.

After that, Doix 2016 was aged for 16 months in new French oak barrels. To preserve its distinctive qualities, the wine was neither clarified nor filtered prior to its bottling. Finally, it was aged for a minimum of 12 months in the bottle before its release.

Decant no less than 1 hour before drinking.

Additional Information
Additional Information
Reviews
2 Reviews
doix!!
Value
Absolutely fabulous. It has a depth and a spell out of this planet. At its best, the telluric, black magic of Priorat is only comparable, on the other side of the spectrum, with the glory of Burgundy. Whay I mean by this is that Burgundy and Priorat are the quirkiest terroirs in the world.
Review by Lover man (Posted on 28 February 2019)
to wine lovers
Value
Up there with the absolute best wines in the world. Just fabulous.
Review by A gift (Posted on 29 January 2018)
Write a review
This websites use cookies. By continuing to browse the site you are agreeing to our use of cookies.
Accept More information