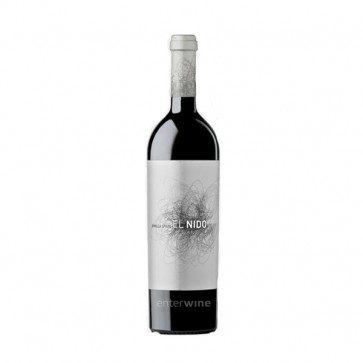 Produced in the southeastern Spanish region of Jumilla, El Nido is the result of the joint venture between Juan Gil and Jorge Ordóñez, both staunch believers in the potential of the Monastrell grape.

The two companies were joined in their effort by the top Australian winemaker Chris Ringland. Famed for its impressive wines from Barossa Valley, he brought his expertise in order to craft a top-notch wine.

The 2016 vintage is made of 70% Cabernet Sauvignon coming from 40 to 50-year-old vines, and 30% Monastrell, coming from of near centenary grapevines.

Collected manually and brought to the cellar in little boxes, alcoholic fermentation and maceration took place in stainless steel tanks at a temperature of 25ºC.

Then this red wine from Jumilla was transferred into new French and American oak barrels, where it completed malolactic fermentation and was aged for 22-26 months.

This wine has a tremendous intensity and complexity, so we recommend that you decant El Nido 2017 for at least 2 hours before you drink it.

Production limited to only 5,000 bottles.

Additional Information
Additional Information
Reviews
2 Reviews
nido
Value
Right now, I'm drinking the 2010 vintage of El Nido. It is beginning to reach the top, though it is still not quite there. I'd rate the 2010 vintage 18/20. I plan to do the same with this and, for that matter, every other vintage of this wine. The sooner you start collecting them, the sooner you will be able to drink a matured one.
Review by Time of the season (Posted on 6 November 2018)
wow
Value
Mindblowing and overwhelming. Desert island wine.
Review by Mario Andretti (Posted on 27 August 2018)
Write a review
This websites use cookies. By continuing to browse the site you are agreeing to our use of cookies.
Accept More information