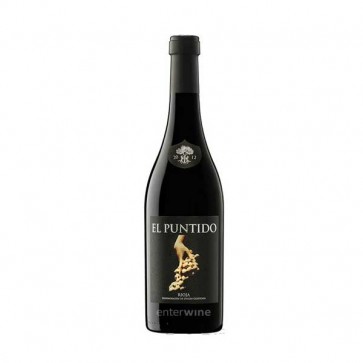 Crianza red wine from Rioja made from Tempranillo, aged for 16 months in new French oak barrels.

Crafted entirely from Tempranillo, El Puntido is a Spanish red wine from La Rioja produced by the Viñedos de Páganos winery. It is located in Páganos-Laguardia, within the Rioja Alavesa.

The 25 hectares of grapevines of El Puntido estate were planted in 1975, at nearly 600 metres above sea level, in soils full of clay with calcareous elements. The vineyard is farmed following organic procedures.

After a meticulous harvest carried out in October, followed by an exacting selection process, the grapes were destemmed and underwent a pre-fermentation maceration that lasted for five days at a constant 6 ºC. During that process, gentle pump-overs and punch-downs were performed. Alcoholic fermentation was carried out over a period of 8 to 10 days at temperatures held constant between 28 and 30 ºC, with 2-3 pump-overs performed daily.

Then this crianza red wine from La Rioja was macerated for 8 days and then it transferred into new French oak barrels, where it completed malolactic fermentation and was aged for 16 months.

A wine with a great ageing potential, we suggest that you decant El Puntido 2016 at least 40 minutes before drinking.

Additional Information
Additional Information
Reviews
2 Reviews
a work of beauty
Value
If you're looking for depth and age-worthiness, stop and look no further. This is your wine.
Review by Justice Mayhem (Posted on 6 November 2018)
MR. PUNTIDO
Value
Awe-inspiring. Pure greatness...
Review by YOU HAVE A POINT (Posted on 5 June 2018)
Write a review
This websites use cookies. By continuing to browse the site you are agreeing to our use of cookies.
Accept More information