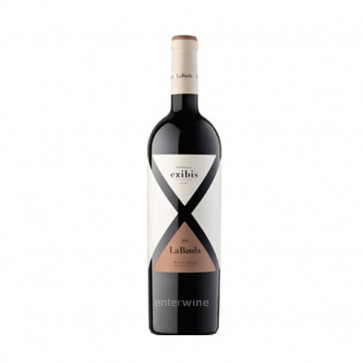 This exceedingly interesting Spanish red wine from the Can Serra dels Exibis Viticultors winery proves that the long recovery process of Catalonia's rich heritage of indigenous grapes has come to fruition.

Indeed, Exibis La Baula is a blend made from 50% Sumoll and 50% Mandó, two red varieties native to Catalonia that you will hardly find anywhere else in the world - with the exception, in the case of Mandó, of the neighbouring region of Valencia.

The grapes come from vineyards planted in clay-limestone soils at an altitude of 500 metres above sea level near the town of Navàs, within DO Pla de Bages. The area has a Mediterranean-Continental climate, and the vines are farmed following the guidelines of biodynamic agriculture.

Picked up by hand, the grapes were refrigerated for a whole night, and subsequently destemmed and fermented in open tanks at a temperature of 25ºC, with several punch-downs, but no pump-overs, during the process. After a 5 day maceration, Exibis La Baula 2018 was aged for 12 months in 3rd year French oak barrels.

Due to bureaucratic reasons, and despite being a variety indigenous to Pla de Bages, the Mandó variety does not appear on the label.

Aerate this red wine from Pla de Bages at the very least 30 minutes before drinking.

Additional Information
Additional Information
Reviews
1 Review
Marvelous
Value
Simply amazing. Very fresh, supple, with a incredible open-air, forest sensation, and just the right amount of fruit. This wine has opened a new world for me.
Review by Uzul (Posted on 9 September 2020)
Write a review
This websites use cookies. By continuing to browse the site you are agreeing to our use of cookies.
Accept More information