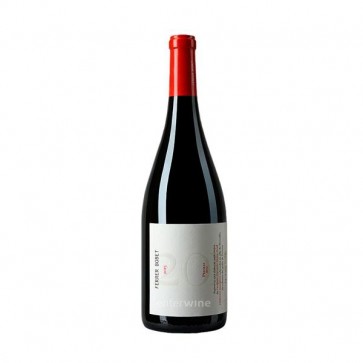 This is the fourth vintage of this Spanish red wine produced by the prestigious Ferrer Bobet winery, co-owned by Sergi Ferrer-Salat and Raül Bobet (who is also the owner and winemaker of the Castell d'Encús winery).

It is made from young vines, 10 to 20 years of age, planted in steep slate slopes on the outskirts of Porrera, Priorat's freshest spot.

Again, Ferrer Bobet is made from a blend dominated by Carignan, and complemented with Syrah and Grenache, plus a touch of Cabernet Sauvignon.

Harvested by hand and meticulously selected, the grapes were selected twice and fermented in 15 and 30 Hl. concrete, stainless steel and wooden vats.

Production around 20,000 bottles. Decant this red wine from Priorat 1 hour before drinking.

FB
Awfully nice Priorat, conversational and controlled. No mineral savagery here. Review by Anthropologist (Posted on 09/04/2019)
new bobet
This one is a serious contender to the "Priorat's absolute best value title". Multilayered, sculpted with laser-like precision. Review by Engineer (Posted on 09/10/2018)
bobet
This is fascinating. Priorat with an Atlantic character. Review by Frederic (Posted on 02/07/2018)
Ferrer
This new wine of Ferrer Bobet includes some French grapes in the blend. This fact makes the wine quite approachable to an international palate, while keeping Priorat's trademark earthy, mineral core. This wine is simply great, and I think it will have a great evolution over the next 5-6 years. Review by Obi wan (Posted on 11/10/2017)