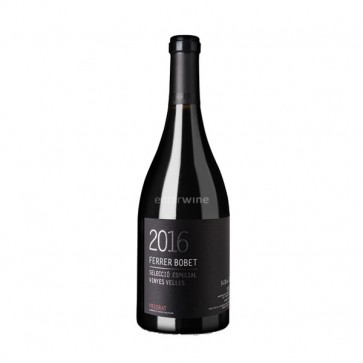 This outstanding effort is a single varietal Spanish red wine made from low-yielding, over 100-years-old Carignan vines planted in steep slate slopes in the very heart of Priorat.

Carignan can sometimes be inexpressive during its youth. However, the passing of time exponentially enhances the vines, taking its roots deeper into the soil and transforming old Carignans into some of the purest expressions of terroir you will find in Spain. In fact, old Carignan expresses like no other grape the deeply mineral, slate soils of Priorat.

After that, Ferrer Bobet Selecció Especial 2016, by the Ferrer Bobet winery, spent a minimum of 16 months in the bottle.The wine was not fined in order to preserve its unique personality.

Additional Information
Additional Information
Reviews
3 Reviews
deep
Value
Read my lips.: EX.TRA.OR.DI.NA.RY.
Review by Walk on by... (Posted on 4 January 2019)
$$$
Value
Simply miraculous. So fresh you almost have to put on a coat to drink it.
Review by Extraordinary (Posted on 25 January 2018)
World-class
Value
Priorat produces the world's best Carignans, and this is one the absolute best. Black slate distilled into an intoxicating wine of an incredible depth, with a fruit so pure it seems out of this world. Besides, this beauty will live for many years.
Review by Bryan Gardiner (Posted on 11 October 2017)
Write a review
This websites use cookies. By continuing to browse the site you are agreeing to our use of cookies.
Accept More information