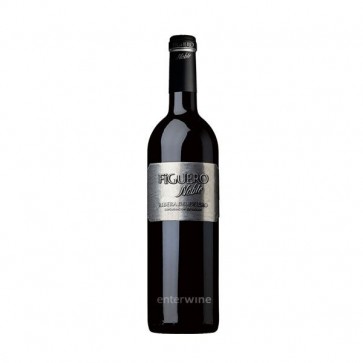 An extremely rare, single varietal Tempranillo, Figuero Noble is made from vines over 70 years of age which figure among the very best in the Ribera del Duero DO.

Manually harvested, the grapes were brought to the premises of the Bodegas y Viñedos García Figuero winery and vinified with the utmost care.

First, they were cold-soaked for two days and the fermented in stainless steel tanks at a controlled temperature, with periodic manual pump-overs of the solid skin cap.

After that, this Spanish red wine was left in contact with its lees for a period of 20 days, and then it underwent malolactic fermentation. Once vinification was completed, the wine began a long ageing period. First, it spent 21 months in new French oak barrels.

Then it was clarified, bottled and aged for a further 12 months in the cellar.

Drink Figuero Noble 2014 until 2030. Decant this red wine from Ribera del Duero a minimum of 1 hour before drinking.

Additional Information
Additional Information
Reviews
1 Review
figuero
Value
This is what I would call a wine to cellar. Right now it is like a raging bull, and you better be a good torero if you want to handle it. Everything is here, though. The fruit, the terroir, the tannins... Give it a minimum of 5 years in a good celler and it will become quite something.
Review by Little John (Posted on 15 January 2018)
Write a review
This websites use cookies. By continuing to browse the site you are agreeing to our use of cookies.
Accept More information