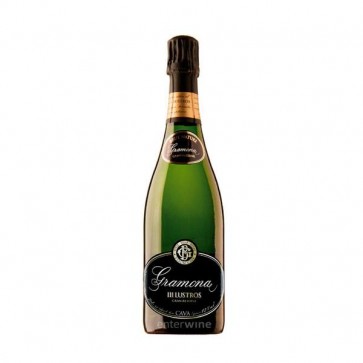 The splendid Gramona III Lustros Gran Reserva Brut Nature is a Cava de Paraje Calificado - Cava's designation for its top tier products -  made from a blend composed mainly of Xarel.lo and complemented with Macabeo.

Both are grown in the Font Jui estate, the Xarel·lo in a 4-hectare plot with clayey soils and the Macabeo in 1 hectare composed of sandy soils.

Both are organically farmed, and the winery is also increasingly embracing biodynamic principles in its agricultural procedures.

Then this Brut Nature was bottled and aged for 70 months in the cellar.

Finally, this Spanish sparkling wine was manually disgorged. No sugar was added to the wine after the process. Natural sugar content amounts to 3 grams per litre.

Drink Gramona III Lustros Gran Reserva Brut Nature 2012 over the next 8-10 years.
Open 30 minutes before drinking. 61,000 bottles produced.
Additional Information
Additional Information
Reviews
3 Reviews
phantastic
Value
This bubbly really made my Xtmas. Young, multlayered, with an immense potential.
Review by La Bamba (Posted on 26 December 2018)
III lustros
Value
Definitely first class. Besides the suave texture, there is always a note of laurel and citrus that sets this sparkler apart.
Review by Trial and error (Posted on 20 December 2018)
Gramona
Value
I can even begin to say how much I like this Cava. You would have to spent two o three times more to find a Champagne not better, but simply as good as this. It has a character very much of its own. It is balsamic, gently mineral, super classy and wonderfully drinkable.
Review by BEst CAVA (Posted on 4 November 2017)
Write a review
This websites use cookies. By continuing to browse the site you are agreeing to our use of cookies.
Accept More information