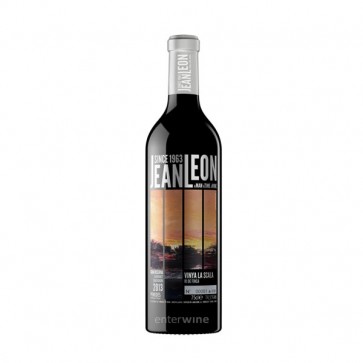 Gran Reserva red wine from Penedés. Old-vines Cabernet Sauvignon aged for 24 months in French oak barrels and for 3 years in the bottle.

Produced only in exceptional vintages, Jean Leon Vinya La Scala is a remarkable old-vines Cabernet Sauvignon with an interesting history behind it.

In 1963, Jean Leon planted the first Cabernet Sauvignon grapevines in the history of Penedès with the aim of fulfulling one of his lifelong dreams: producing a Spanish red wine bearing his name. Composed of gravelly-sandy soils, the 8-hectare estate was named La Scala, like Jean Leon's famous Hollywood restaurant.

After the 1969 one, which went in its entirety to Jean Leon's restaurant, the first commercially released vintage of Vinya La Scala was 1970. Thus, this Vino de Finca (single estate wine) became the first varietal Cabernet Sauvignon produced in Spain.

The 2013 vintage of this red wine from Penedès was harvested the 23rd of October. The grapes were hand-picked and selected twice, first in the vineyard and the in the cellar. After that, the grapes were macerated for 20 days and fermented in stainless steel tanks. Then this organic red wine was transferred into new French oak barrels, where it completed malolactic fermentation and was aged for 24 months. Finally, Jean Leon Vinya La Scala 2013 was aged for 3 more years in the bottle.

Every vintage of this Gran reserva Cabernet Sauvignon comes with a new label, which is always designed by a renowned artist. Gloria Muñoz was the author of the 2013 vintage label.

Additional Information
Additional Information
Reviews
1 Review
Top Bordeaux blend
Value
This wine is quite something: poised, crisp, really deep. Will improve for many years.
Review by Michael Moore (Posted on 16 September 2020)
Write a review
This websites use cookies. By continuing to browse the site you are agreeing to our use of cookies.
Accept More information