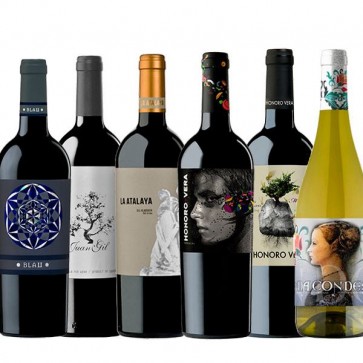 6 wines produced by the Gil Family in different DOs.
Grapes Varieties:
Wineries:
Sign up to get notified when this product is back in stock

Here's a selection of the wines produced by one of Spain's most important wine dynasties: the Gil Family.

The history began in 1916, when the patriarch Juan Gil started his first winery in the southeastern Spanish region of Jumilla. In 2002, the Juan Gil winery began to expand to other regions of Spain through the acquisition of little wineries in some of the country's most prestigious Designations of Origin. The aim of the those wineries, gathered under the brand Gil Family Estates, is and has always been the same: to produce affordable, honest, terroir-driven wines from each region's indigenous grapes.

The first wine of our selection comes from Jumilla, the place where it all started almost a century ago. Juan Gil Etiqueta Plata 2014 is a great expression of the Monastrell (aka Mourvèdre) grape. Quite different, and maybe even more interesting, is the organic red Honoro Vera Organic 2015, an unoaked Monastrell that shows a wonderful purity of character and a striking freshness.

Going northto the dry, rugged mountains of Calatayud, we find another version of the Honoro Vera wine. Produced by the Ateca winery, this Honoro Vera 2015 is a varietal Grenachefull of tension, minerality and fruit.

Established in 2007 in the Almansa DO, Bodega Atalaya produces La Atalaya del Camino 2014, a yummy red aged for 12 months in oak barrels. As for Catalonia, the Gil Family founded the Can Blau winery in the Montsant region, right next to Priorat, in order to produce the mineral, deep red wines the region is famous for. A good example is Blau 2015, made from a blend of Grenache, Carignan and Syrah and aged for a brief period of 4 months.

The latest chapter in the history of Gil Family Estates is currently being written in Galicia. Crafted by the Lagar da Condesa winery,  Lagar da Condesa 2014 is an Albariño that was partially fermented in oak barrels and subsequently aged for 4 months on its lees.

Reviews
0 Reviews
Write a review
This websites use cookies. By continuing to browse the site you are agreeing to our use of cookies.
Accept More information