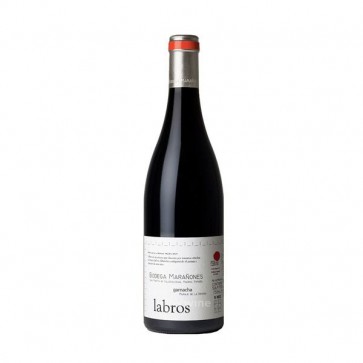 Made from organically grown grapevines over 70 years of age, this Spanish red wine comes from Viña de Lloros, a .7 hectare vineyard composed of highly weathered granitic soils which sits at an altitude of 650 metres above sea level.

Bearing the DO Vinos de Madrid, the vineyard lies at the heart of Sierra de Gredos, a region which, most probably, will not be recognized with the Designation of Origin it rightly deserves, due to the ineptitude of the Spanish regulatory system.

After a careful selection, the undestemmed grapes were cold-soaked prior to being crushed in order to extract colour and aromas. Then, this red wine from Madrid was fermented in 500-litre oak barrels using indigenous yeasts.

Finally, Labros 2016 was aged in those same barrels for 12 months. Prior to its bottling, the wine was neither filtered nor clarified.

Production of this Grenache from Gredos is very scarce: 2,400 bottles.

Decant 1 hour before drinking. Drink until 2024.

As a side note, it is worth noting that Gredos is not only Spain's hottest wine region, but also the most important rediscovered one since the resurgence of Priorat. The area is home to several world-class Grenache wines, the best of which are only comparable - some would say even superior - to Château Rayas.

Additional Information
Additional Information
Reviews
3 Reviews
Excellent garnacha!!
Value
Impressed by this classy Garnacha. Who would have guessed that central Spain could produce such beauties?
Review by Ox-Bow (Posted on 26 March 2019)
trust me!!
Value
Really classy. For me this Grenache has little in common with Chateauneuf or Priorat. It is at least as good, probably more.
Review by Grenache man (Posted on 30 October 2018)
gredos
Value
For me, Gredos means Grenache and Grenache means Gredos. This wine is a distillantion of the forest, the sun, the pure water, the wild berries and the altitude of the mountains.
Review by Bonino (Posted on 26 January 2018)
Write a review
This websites use cookies. By continuing to browse the site you are agreeing to our use of cookies.
Accept More information