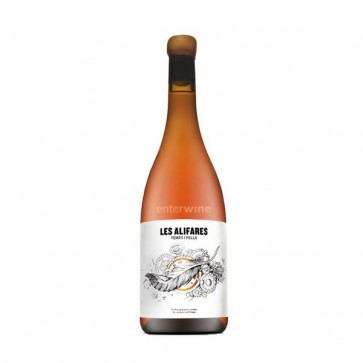 This is the new vintage of Les Alifares, arguably the most interesting Spanish white wine produced by Celler Frisach. This winery is one the most adventurous and free-spirited currently working in the increasingly talked-about DO Terra Alta.

Two features make this organic white wine stand out. First, it is a single varietal Grey Grenache - locally known as Vernatxa Gris - coming form a 65-year-old vineyard, Finca La Serra, located near the town of Corbera d'Ebre. The soils are made of fossilized dunes rich in silt and clay, known in the area as panal soils.

Though rather common in both sides of the French-Spanish Mediterranean borderland, up to now it was seldom found in wines from Terra Alta. In fact, this was the first-ever varietal Grey Grenache commercially released in the region.

Moreover, this white wine from Terra Alta is made through the traditional brisat technique, which consists in macerating the wine must with the grape skins and the stems for two weeks. This gives the wine colour, tannin, aromas, and good bones, resulting in what is nowadays called an orange wine. After finishing maceration, the wine was aged on lees for 8 months.

Finally, Les Alifares 2020 was bottled unfined, unfiltered and with no added sulphur.

Aerate some time before drinking.

Additional Information
Additional Information
Reviews
1 Review
Alifares
Value
A sort of orange wine, but less tannic than most oranges out there. Strikingly original, with a character very much of its own. Curry and quince, crisp, layered. Fair price.
Review by Stu (Posted on 9 September 2019)
Write a review
This websites use cookies. By continuing to browse the site you are agreeing to our use of cookies.
Accept More information