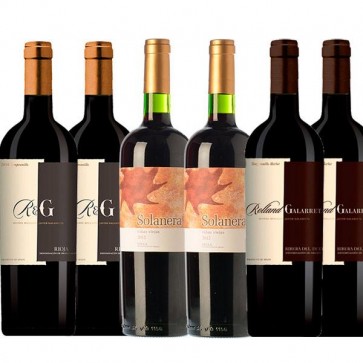 3 great, versatile red wines.
Grapes Varieties:
Wineries:
Sign up to get notified when this product is back in stock

From Yecla, in the southeastern Spanish region of Murcia, Solanera 2012 is a blend of Monastrell (a.k.a. Mourvèdre), along with Alicante Bouschet (known as Garnacha Tintorera in Spain), and Cabernet Sauvignon. Coming from old vines and aged for 10 months, the amazing complexity and richness of this wine is such that Robert Parker gave it an amazing score of 94 points.

The great Michel Rolland, arguably the world's most famed winemaker, had long been wanting to make a wine in La Rioja, one of the world's great wine regions. Produced by the Rolland & Galarreta winery, R&G Rioja 2011 is a varietal Tempranillo to which Mr. Rolland has brought his inimitable touch of French elegance and sophistication.

Mr. Rolland's ambitions to produce great wines in Spain, though, soon reached the neighbouring Ribera del Duero zone. Coming from high-altitude vines, Rolland Galarreta Ribera del Duero 2010 is a blend of Tempranillo and Merlot that was aged for 10 months and which displays amazing balance and wonderful notes of red fruit and spices.

Our pack comprises two bottles of each of this three wines.

Reviews
0 Reviews
Write a review
This websites use cookies. By continuing to browse the site you are agreeing to our use of cookies.
Accept More information