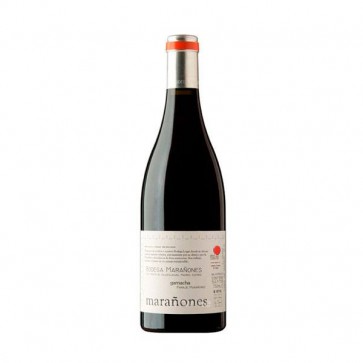 The Spanish red wine Marañones takes its name from the area where most of the vineyards of the winery are located. A place full of sloe bushes ("Arañones" in Spanish).

A single varietal Grenache, this wine belonging to the Vinos de Madrid DO, an area located in the increasingly prestigious Gredos Mountains, is made from grapes coming from three, 50 to 70-year-old vineyards grown in granitic soils.

North-oriented and organically farmed, the vines are located at altitudes between 750 and 850 metres above sea level.

After the harvest, the whole bunches of grapes were cold-macerated and fermented with indigenous yeasts in 33-Hectolitre French oak vats.

After that, malolactic fermentation took place in 500-litre, 2nd year French oak barrels. Then the wine was aged for 12 months.

This wine of the Bodega Marañones was not filtered, stabilized or clarified prior to its bottling.

Production limited to only 9,000 bottles and 54 magnums.

Additional Information
Additional Information
Reviews
2 Reviews
subtle
Value
A very subtle and nuanced wine this is. You keep discovering new things as you go along.
Review by John Fogerty (Posted on 4 January 2019)
upgraded
Value
No wonder that Gredos has become the talk of the town. This is only the entry level wine of the company, but it is excellent. Fennel, dim mineral notes, little red berries. Everything is subtle, nothing is shouted.
Review by Gredos (Posted on 15 January 2018)
Write a review
This websites use cookies. By continuing to browse the site you are agreeing to our use of cookies.
Accept More information