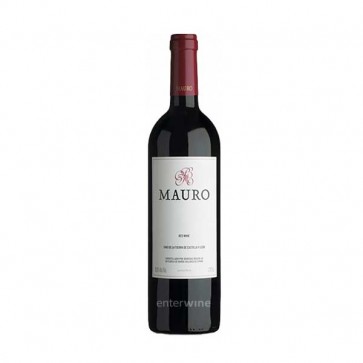 The last vintages of this prestigious Spanish red wine -crafted, as always, by the respected winemaker Mariano García- are somewhat different from the former ones. Thus, Mauro currently exhibits a lighter, more Atlantic character.

This Crianza red wine from Castilla y León was produced from a blend of 90% Tempranillo and 10% of other red varieties, all coming from over 25 year-old vines. The 2017 vintage was the earliest in the history of the winery. Harvest began on September 5.

Selected in the vineyard and in the cellar, the grapes were destemmed and separately vinified according to the variety and plot of origin. Alcoholic fermentation took place in big stainless steel tanks and was followed by a 2 to 3 week skin maceration.

Then it was transferred into American and French oak barrels, where it was aged for 15 months.

Finally, this red wine from Castilla y León produced by Bodegas Mauro was aged for a further 3 months in the cellar prior to its release. It was bottled in April 2019.

We suggest that you decant Mauro 2017 a minimum of 1 hour before you drink it.

Bear in mind that this remarkable red wine from Valladolid will considerably improve over the next years.

Great wine
Mauro ranks very high on my top Spanish wines list. This is a wine for the future, though. Now it feels agonizingly young. Put it to sleep and do not wake it before 5 years. Review by Stephen N. (Posted on 18/01/2018)