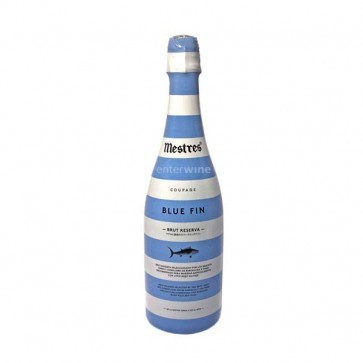 Gran Reserve Cava made from Xarel·lo, Macabeo and Parellada. Aged over 50 months in the bottle.

Produced by the prestigious Mestres winery, Mestres Blue Fin Gran Reserva Brut is an homage to the fishermen and the chefs of one of Spain's most interesting gastronomic regions:the Cádiz province.

More specifically, this Cava is dedicated to the four tunny fisheries that still exist in that southernmost Spanish province: Barbate, Tarifa, Conil and Zahara de los Atunes. For more than 700 years, those four fisheries have been supplying food lovers all over the world with one of the best delicacies coming from the sea: Bluefin tuna.

This great Spanish sparkling wine is the result of a tight collaboration between winemakers, sommeliers and chefs. Their aim was to create a product that could be the perfect match with any of the forms in which Bluefin tuna is prepared: sushi, tataki, tartare, griddled, the Basque Marmitako -you name it.

Made from a blend of 40% Xarel·lo, 35% Macabeo and 25% Parellada, the grapes come chiefly from estate-owned, 60-year-old vines, as well as from some younger ones, 15 years of age, controlled by the winery's oenologists.

The harvest of this Cava Gran Reserva was carried out manually. A portion of the base wine was aged on its lees in oak barrels for 5 months.

After the completion of secondary fermentation, Mestres Blue Fin Gran Reserva Brut was aged for more than 50 months in the bottle. Finally, this Cava was manually disgorged prior to its commercial release.

Additional Information
Additional Information
Reviews
1 Review
good cava
Value
Though I don't quite like the packaging, the Cava is in fact very good.
Review by Blue Finish (Posted on 13 February 2018)
Write a review
This websites use cookies. By continuing to browse the site you are agreeing to our use of cookies.
Accept More information