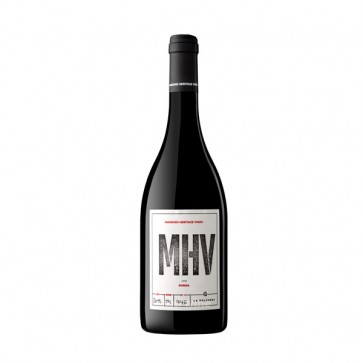 The remarkable MHV is the new flagship Spanish red wine of the Finca La Melonera winery. This wine substitutes the hitherto known as Embajador Gálvez.

As it happens in each and every part of Spain, the sunny region of Andalusia possesses a rich array of indigenous varieties that, up until now, had been sadly underestimated.

Luckily, though, the tide is changing.

The people at the Finca La Melonera winery are working very hard to recover that precious heritage. The region they have chosen to show the full potential of Andalusian native varieties belongs to the the province of Málaga. Labelled as Sierras de Málaga, the place is located at altitudes between 600 and 900 metres above sea level. A pristine environment where the vineyards grow surrounded by many kinds of aromatic plants and some mighty holm oaks.

As for the grapes, this red wine from Málaga is made from a blend of Tintilla de Rota and Romé. Both were manually harvested and selected twice, on site and in the cellar. Then 50% of the wine was vinified in stainless steel tanks, and the other half completed the process in open, 300-litre French oak barrels.

After a long maceration period, all of the wine MHV 2015 was aged for 6 months in the aforementioned barrels. Then this red wine from native Andalusian varieties was blended and aged for a further months in the bottle before its release.

The result of a great effort, this MHV (Mankind Heritage Vines) is a love letter to the land. Production is extremely limited.

Drink until 2023. Gently decant it 1 hour before drinking.