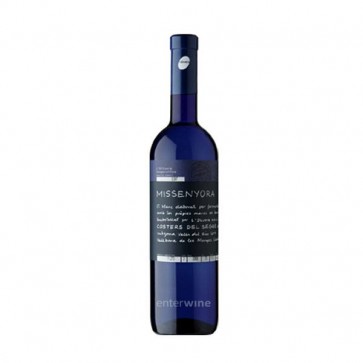 Crafted by L'Olivera Cooperativa solely from Macabeo, the 2018 vintage was rather interesting, as it was an uncommonly rainy one.

The grapes were harvested by hand, whole bunch pressed, fermented in 80% American and 20% French oak barrels, and subsequently aged for 4 months with weekly stirrings.

After that, the winery recovered an old technique that consists in adding concentrated wine must - obtained through boiling - to this Crianza white wine (the proportion being 9 to 10 grams per litre). Thus, the resulting white wine from Costers del Segre shows a great balance between acidity and sweetness.

By the way, Missenyora, (which literally means "Milady"), was the way people addressed the abbess of the Vallbona de les Monges Monastery, which is a stone's throw away from the winery.

Additional Information
Additional Information
Reviews
2 Reviews
missenyora
Value
I love this wine. It balances very well oak and fruit.
Review by Monk (Posted on 20 July 2018)
mi senyor
Value
Delicious. The palate is a combination of spices, apricots and hazelnuts. Nice body and long finish.
Review by Wilander (Posted on 6 September 2017)
Write a review
This websites use cookies. By continuing to browse the site you are agreeing to our use of cookies.
Accept More information