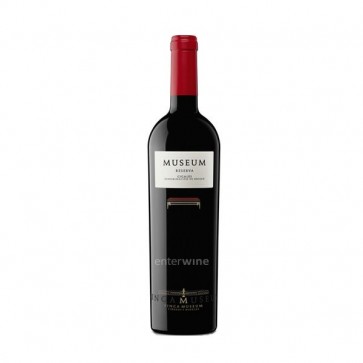 This interesting Spanish red wine comes from the DO Cigales, a region in central Spain mostly known from its rosé wines.

This is an area where grapes ripen exceptionally well, because of its geologic characteristics and tough climate, with freezing winters and wild temperature differences between daytime and nighttime during the summer.

A single varietal varietal Tempranillo, Museum Reserva is made from over 70-year-old vineyards planted in clayey-limestone soils with a thick layer of pebble stones on the surface. The place is located at an altitude around 800 metres above sea level, overlooking the Pisuerga river.

Manually harvested and selected in 15 kg boxes, the grapes were destemmed, fermented in 15,000-litre stainless steel tanks and macerated on its lees for about 20 days.

After that, Museum Reserva 2015 was aged for 22 months in new French oak barrels, during which period it was racked several times.

Finally, this reserve red wine by Finca Museum was aged for a further 15 months in the cellar before its release.

Aerate this red wine from Cigales 1 hour before drinking.

Additional Information
Additional Information
Reviews
1 Review
Excellent wine
Value
I highly recommend this type of red wine for any occasions.
Review by Ilia (Posted on 4 January 2018)
Write a review
This websites use cookies. By continuing to browse the site you are agreeing to our use of cookies.
Accept More information