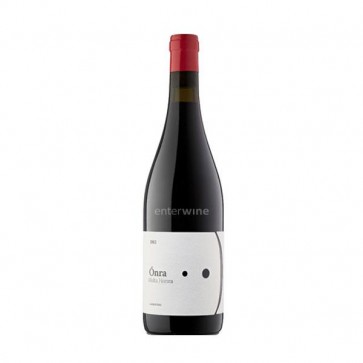 An organic red wine produced by Celler La Gravera, Ónra Moltahonra is born in the Costers del Segre DO, a steadily growing wine region located in the province of Lleida, 150 kilometres from the city of Barcelona.

The wine is a blend of 75% Grenache and 25% Cabernet Sauvignon coming from certified organic vines located in the regions of El Segrià and La Noguera. Soils are composed of loam, and the vines, oriented northwest-southeast, grow under a Mediterranean climate with some continental influences. Thus, differences between daytime temperatures and nighttime temperatures are significant.

After a mild, rainy spring and a summer that was cool at the beginning and dry and hot at the end, the grapes used to produce this organic red wine were harvested in October and brought to the cellar in little, 8-kilogram boxes.

Selected twice and kept at a temperature of 6ºC, prior to fermentation the Grenache grapes were macerated for three days with periodic rackings. Alcoholic fermentation was carried out at a temperature between 24ºC and 26ºC, with each variety being separately fermented. Then Ónra Moltahonra 2012 was aged for 18 months in light and medium-toasted French oak barrels.

Drink this Crianza red wine from Costers del Segre until 2023. Aerate before drinking.

Additional Information
Additional Information
Reviews
1 Review
onra
Value
Unknown winery, unknown region. It made an excellent impression on me. I will definitely buy it again.
Review by Red Garland (Posted on 2 October 2018)
Write a review
This websites use cookies. By continuing to browse the site you are agreeing to our use of cookies.
Accept More information