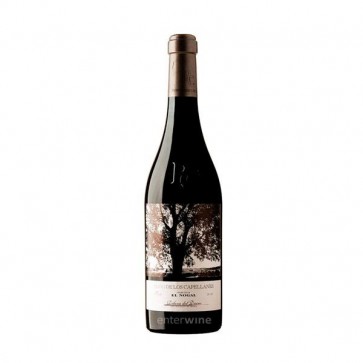 This high-end Spanish red wine is one of the flagship products of bodega Pago de los Capellanes, one of the most prestigious in Ribera del Duero.

The vines grow in clay-limestone soils that bring a particular finesse and minerality to the wine. Moreover, yields are quite low.

Harvested by hand, the grapes were refrigerated, macerated for 7 days and then fermented in new French cone-shaped vats using indigenous yeasts.

After that, Pago de los Capellanes 2016 from Ribera del Duero completed malolactic fermentation and was aged for 22 months in French oak barrels from different origins. During that period, the wine was racked four times.

It was not filtered, clarified or stabilized before its bottling.

This wine in only produced in exceptional vintages.

Additional Information
Additional Information
Reviews
2 Reviews
Impressive
Value
Classic, bold Rivera. Love the style, loved the wine.
Review by Rocket Man (Posted on 2 July 2020)
Nogal
Value
An expensive wine indeed, but worth the buy. After a long aeration it began to unfurl, and it was amazing. The fruit, the depth, the impression of terroir. All in all, I think this wine should be aged for some years, because it is only beginning to fulfill its potential.
Review by James-St. Pancrass (Posted on 4 October 2017)
Write a review
This websites use cookies. By continuing to browse the site you are agreeing to our use of cookies.
Accept More information