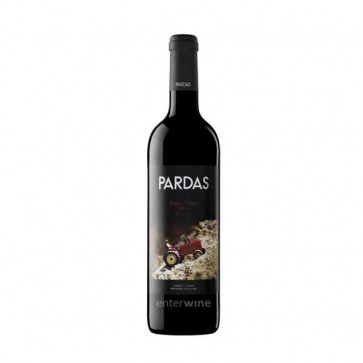 Produced by the Pardas winery, Pardas Negre Franc is a Bordeaux blend made from organically certified vineyards belonging to the DO Penedès.

Specifically, this Spanish red wine is composed of 77% Cabernet Franc and 23% Cabernet Sauvigon. The grapes of the former variety come from two estates: Vinya de la Barraca, planted in 1996, and Les Obagues Velles, planted in 1998. The Cab. Sauvignon grapes come exclusively from the first estate. Both are farmed following environmentally friendly procedures, using no pesticides or chemical herbicides whatsoever.

Separately harvested during September, the two grape varieties of this Penedès red wine were also vinified separately. First, they were destemmed and fermented in centenary concrete tanks lined with resin for a period of 23 to 27 days.

After that, this organic red wine completed a spontaneous malolactic fermentation, and then it was transferred into 225 and 300-litre French oak barrels, where it was aged for 11 months. It was delicately filtered prior to its bottling.

Aerate this Crianza red wine some time before drinking.

Additional Information
Additional Information
Reviews
1 Review
negre frach
Value
2 Cabs and... Sumoll? It sounds strange, but now, after 7 years, it works surprisingly good.
Review by Martha the teetotaller (Posted on 14 June 2018)
Write a review
This websites use cookies. By continuing to browse the site you are agreeing to our use of cookies.
Accept More information