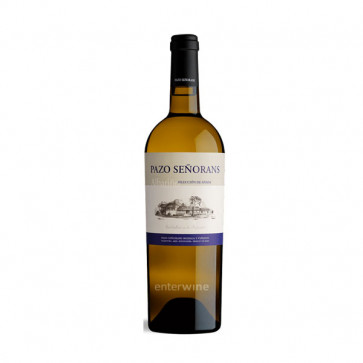 Crianza white wine from Rías Baixas. Varietal old-vines Albariño aged for 30 months on lees in steel tanks and for 12 months in the bottle.
On lees. 30 Months mixing in stainless steel
Percentage of Alcohol: 13º
Bottle size: 75 cl
D.O.: Rías Baixas
Grapes Varieties: Albariño,
Wineries: Pazo de Señorans
P 95 ñ 98 94 96
Sign up to get notified when this product is back in stock

One of Spain's absolute best varietal Albariño wines, Pazo Señorans Selección de Añada is produced from vineyards located near the village of Meis, in the Salnés county, within DO Rías Baixas.

More specifically, the grapes are sourced from a vineyard at 300 metres of altitude close to the Atlantic coast. The average age of the vines, strategically planted in the lower course of a river, is 45 years. Soils are composed of "xabre", which is the Galician word for a type of decomposed granite.

This top-notch Spanish white wine from bodega Pazo de Señorans was crafted with the utmost care. The grapes were hand-harvested, transported to the cellar in little boxes, meticulously selected, macerated for a short time and vinified in stainless steel tanks.

After that, Pazo Señorans Selección de Añada 2012 was aged on its lees for 30 months in the tanks. Finally, it was aged for a minimum of 12 months in the bottle before its commercial release.

The quality of this Crianza white wine from Rías Baixas has been recognized with numerous distinctions and awards, as well as with consistently high scores from senior wine critics.

Additional Information
Additional Information
Reviews
1 Review
Best Albariño
Value
Spain's best Albariño? Amazingly textured, mature, very rich on the nose (laurel, green olives, fennel, petrol...) and intense on the palate, with superb acidity and real depth. Neverending finish.
Review by Gunnar (Posted on 24 October 2017)
Write a review
This websites use cookies. By continuing to browse the site you are agreeing to our use of cookies.
Accept More information