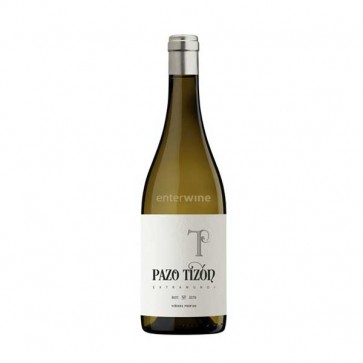 White wine from Ribeiro. Blend of Albariño and Treixadura aged for 8 months in tanks.

Based in Galicia, the Pazo Tizón winery only produces two wines, a red wine and this Spanish white wine.

A blend of 50% Albariño and 50% Treixadura, Pazo Tizón Extramundi is made from estate-owned vineyards planted within a site protected by a 4 centuries old wall. The plants are over 30 years of age.

After the harvest, the grapes were selected, destemmed and crushed with a pneumatic press. Only the "free-run" juice was used to produce the wine.

Fermentation was carried out in stainless steel tanks. Once completed, the wine was aged for 8 months on its lees.

Finally, Pazo Tizón Extramundi 2019, from the DO Ribeiro, was aged for a further 2 months before its release.

The Pazo Tizón winery belongs to a category of wineries known as "Bodegas de colleiteiro", a group of artisan wineries belonging to the DO Ribeiro which produce small quantities of wine in a traditional way, and exclusively from estate-owned vineyards.

Additional Information
Additional Information
Reviews
2 Reviews
white tizon
Value
Good Albarino white. Fresh, suave and expressive.
Review by Athenea (Posted on 1 February 2018)
Tizon
Value
I recently discovered this albariño and I warmly recommend it. It is nice and smooth and drinks easily. It is very good with creamy cheese.
Review by Troy (Posted on 24 October 2017)
Write a review
This websites use cookies. By continuing to browse the site you are agreeing to our use of cookies.
Accept More information