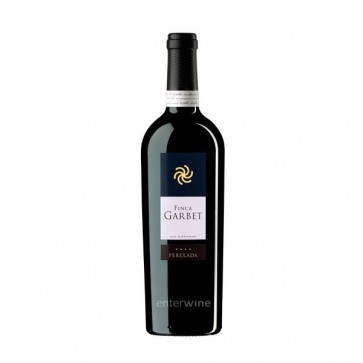 Red wine from L'Empordà made from a blend of Syrah & Cabernet Sauvignon aged for 18 months in French oak barrels.

An excepcional 12-hectare estate, Finca Garbet is located on one of the spurs of Cap de Creus, the headland that constitutes Spain's easternmost point.

Owned by Castillo de Perelada, the vineyards are planted in terraces composed of slate soils, directly facing the Mediterranean Sea.

Belonging to the DO Empordà, the place is constantly swept by a harsh, dry, unrelenting northern wind called Tramuntana, which is the most effective sanitizing agent that one can imagine. Besides that, it also operates as a natural temperature regulator.

This Spanish red wine is made from a blend of the varieties grown in that estate, namely Syrah and Cabernet Sauvignon. They were planted 20 years ago.

Harvested by hand, the grapes were vinified in stainless steel tanks with two daily pump-overs. Fermentation was carried out using indigenous yeasts, and maceration lasted for 30 days.

After that, Perelada Finca Garbet 2014 was aged for 18 months in French oak barrels (Tronçais).

Decant this red wine from L'Empordà a minimum of 1 hour before drinking.

Additional Information
Additional Information
Reviews
2 Reviews
garbet
Value
On a par with some truly big names from Australia. It is not cheap, but if you like the style it is worth it.
Review by Hobbes (Posted on 23 February 2018)
Regal
Value
I was in serious awe after finishing this wine. The big structure and volume are perfectly complemented with the mark of terroir. Plenty of local character, with an international flair.
Review by Allan Johnston (Posted on 21 September 2017)
Write a review
This websites use cookies. By continuing to browse the site you are agreeing to our use of cookies.
Accept More information