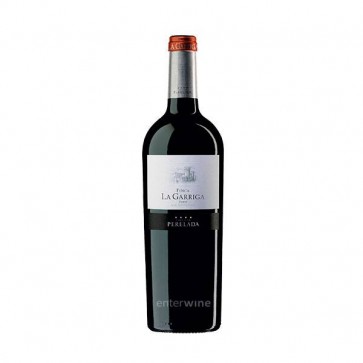 A single varietal red wine, Perelada Finca La Garriga is crafted from over 50-year-old Samsó (a.k.a Carignan) vines located in the northern Catalan region of L'Empordà.

During its youth Carignan usually produces wines that are not terribly interesting. However, as the vines grow older its expressivenes, as well as its capacity to convey a real sense of terroir, increase exponentially, thus resulting in truly significant wines.

In this case, the vines of this Spanish red wine by the Castillo Perelada winery grow in clay-limestone soils that have very low levels of organic matter and are covered with sand and gravel. Located near the French border, the vines are constantly swept by a harsh northern wind called Tramuntana.

Harvested by hand, the grapes were fermented, macerated for a long period of time and aged for 18 months in new, fine-grain American oak barrels.

After that, Perelada Finca La Garriga 2015, from the Empordà DO, was aged for a further months in the bottle prior to its release.

Additional Information
Additional Information
Reviews
2 Reviews
Superb carignan
Value
A serious wine indeed. Extremely fresh, with an earthy palate and overall bold nature. Clean and sharp, though. It needs some years to peak.
Review by Distant echo (Posted on 5 February 2019)
Garriga
Value
Yessir!! This wine is REALLY deep and mineral. Bone dry, with cocoa and raspberries dancing on the palate. Superb.
Review by Portishead (Posted on 30 September 2017)
Write a review
This websites use cookies. By continuing to browse the site you are agreeing to our use of cookies.
Accept More information