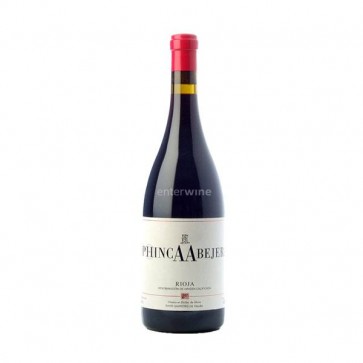 Red wine from Rioja made from Tempranillo, Grenache, Graciano and Viura, aged for 36 months in oak barrels.

Yes, a single estate, terroir-driven wine in the land of Oak and Glory. This trend has been labelled "Rioja's third way" by a distinguished Spanish wine journalist - the first one being traditional Rioja, and the second one being the technological, New World-oriented one. -

The name of a less than 1 hectare estate located in Elvillar, La Abejera was planted in 1929 in a soil composed of limestone with very low levels of organic matter. Three of the four grapes that make the blend of this Phinca Abejera 2012, Tempranillo, Grenache and Viura come from that estate. Graciano, the fourth one, comes from an estate named Valmayor.

Handpicked and transported to the cellar in 10 kg. boxes, the grapes were partially destemmed and spontaneously fermented using only indigenous yeasts. Meticulously vinified, this red wine from Rioja was aged in French oak barrels for 36 months. Finally, the resulting 2,000 bottles were bottled without filtration or stabilization.

Drink until 2025. Decant a minimum of 1 hour before drinking.

Additional Information
Additional Information
Reviews
1 Review
wine
Value
Fabulous stuff, almost burgundian in its refinement. There's more meat here, though. Sampedro is a trailblazer.
Review by Trailblazer (Posted on 18 December 2018)
Write a review
This websites use cookies. By continuing to browse the site you are agreeing to our use of cookies.
Accept More information