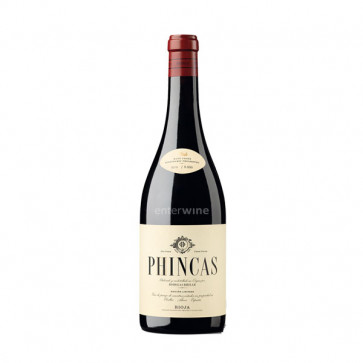 It is made from 4 little plots of organically and biodynamically farmed low-yielding vineyards located near the town of Elvillar, Álava. The 30 to 100-year-old grapevines totalize 2.5 hectares.

As for the composition, this Vino de Paraje is made principally from Tempranillo, complemented with Graciano, Grenache and, following the Rioja tradition of adding a tiny amount of white grapes to red blends, a brushstroke of Viura.

Harvested by hand, only half of the grapes were destemmed. Both halves were fermented into a big wooden vat with indigenous yeasts. Then they were pressed and transferred into 500-litre French oak barrels, where malolactic fermentation was completed.

After that, Phincas 2018 from DSG Vineyards was aged for 36 months in the barrels, after which it was transferred into 8,000-litre French oak vats, where this organic red wine was further aged for 6 months.

We suggest that you decant this red wine from La Rioja at least 30 minutes before drinking.

Additional Information
Additional Information
Reviews
1 Review
Phincas, wow!!
Value
The best Rioja I've had in years. Precise and really deep, this wine really sets a new Rioja paradigm for me. Now I must try DSG's Gran Crus.
Review by Maginot line (Posted on 19 February 2019)
Write a review
This websites use cookies. By continuing to browse the site you are agreeing to our use of cookies.
Accept More information