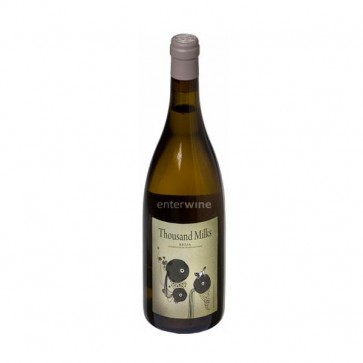 White wine from Rioja made from Viura, White Grenache and Malvasía aged for 11 months in French oak barrels.

The main ingredient of this Spanish white wine is Viura (aka Macabeo) coming from vineyards planted in 1910, complemented with Malvasía and White Grenache, both of them planted in 1929.

The harvest of this organic white wine was carried out, as with all David Sampedro's wines - a winemaker internationally known, incidentally, as one of La Rioja's new "terroirists" - according to the specifications of the biodynamic calendar.

The whole winemaking process of this Crianza white wine took place inside wooden barrels. Macerated for a week, after a gentle crushing the wine must was fermented in French oak barrels and subsequently aged for 11 months with frequent lees-stirrings.

Properly stored, Phincas Thousand Milks 2013 will improve in the bottle for about 6-8 years.

Additional Information
Additional Information
Reviews
2 Reviews
Dear DSG!!
Value
This white wine ought to revolutionize the way Rioja whites are perceived. This is something completely new because it cannot be further from the generic character that almost all Rioja whites, even the very best, display. 5 stars.
Review by Thousand thanks (Posted on 18 December 2018)
Congrats DSG Vineyards!!
Value
A friend gave me this wine as a present. He was super excited about it, but I really didn't know what to expect. Queer name. Unknown producer (for me). Then I opened it, wait about 1 hour and... Wow!! The best white wine I've had in a long time. Deep, multi-layered, fresh. Makes love with your palate and leaves you in awe!
Review by Delius (Posted on 18 August 2017)
Write a review
This websites use cookies. By continuing to browse the site you are agreeing to our use of cookies.
Accept More information