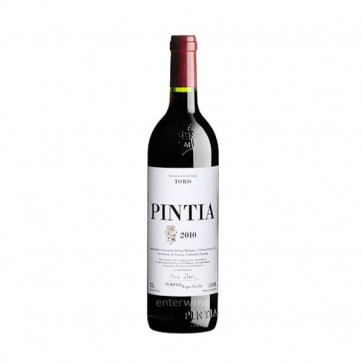 After years of careful study, Vega Sicilia, Spain's most legendary wine brand, decided to make a wine in the Toro area, in the province of Zamora. A traditional wine-producing region, though somehow neglected for a long time, this Designation of Origin west of Ribera del Duero has enjoyed a true renaissance over the last years, producing ever more complex, refined and satisfying wines.

The result was Pintia, a wine that developed a great reputation almost from its first released vintage.

As for this Pintia 2010, the hand-picked grapes went through two selection processes, one on the vineyard and one in the cellar. Then the tinta de Toro grapes -allegedly a mutation of Tempranillo with higher tannin level- were destemmed, gently pressed and put into stainless steel tanks. After alcoholic fermentation and skin maceration were completed, the wine was put in french (70%) and american (30%) oak barrels, where it underwent malolactic fermentation and was aged for 12 months. Before emptying the barrels, the wine was clarified at a low temperature with egg whites in order to fully preserve its varietal expression.

Finally, Pintia 2010, by Bodegas y Viñedos Pintia, was bottled and remained in the cellar for two more years before its market release. All bottles are numbered. Parker 95!!