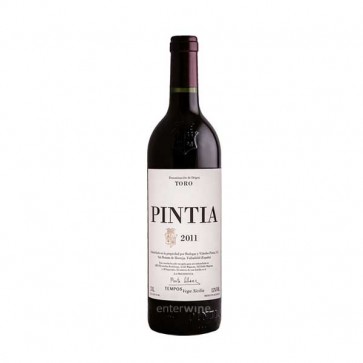 This is the new vintage of Pintia. The producer of this Spanish red wine, the legendary Vega Sicilia winery, is driven by the aim of bringing out the best qualities of the bold Tinta de Toro grape.

The grapes are sourced from two plots with very different soils, planted with vines around 30 years years of age.

The 2016 vintage was an overall dry one, with high temperatures during the summer. Fortunately, there were no frosts during veraison. The ripening of the grapes was not homogenous, thence harvest took three weeks to complete, from September 13 until October 7.

Harvested by hand, the Tinta de Toro grapes were meticulously selected. After being destemmed, they were fermented in stainless steel tanks. After that, Pintia 2016 was aged in mostly new French oak barrels (75%) and American oak barrels (25%) for 12 months.

Bottled in May 2018, this Crianza red wine of Bodegas Pintia was clarified with egg whites, bottled and aged for about 36 months before it hit the market.

Decant this red wine from Toro 2 hours before drinking.