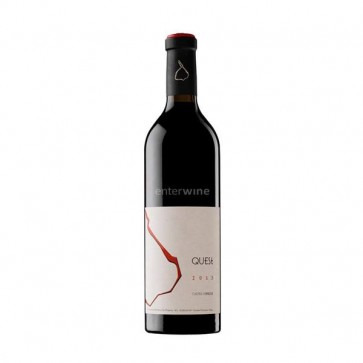 The production of Quest was the result of a long search. Mr. Raül Bobet, one of Spain's most internationally acclaimed winemakers, had been looking for a place located between 850 and 1000 metres above sea level, where altitude could help prevent the effects of climate change.

Finally, he found it in Castell d'Encús, a former settlement of the Hospitaller monks - also known as the Knights of Malta -  located in the southern slope of the Pre-Pyrenees, a region belonging to the Catalan DO of Costers del Segre. Amazingly, the place still has several open-air stone vats dating back from the 12th century and dug by the monks themselves.

Manually harvested in little boxes, the grapes of this red wine from Costers del Segre were fermented in the open-air stone vats, in the midst of a pristine, unspoiled natural environment. After that, Quest 2016 was aged for 17 months in French oak barrels. The wine was not filtered or stabilized before its bottling.

Decant this wine at least 30 minutes before drinking.

Additional Information
Additional Information
Reviews
2 Reviews
Mr. Quest
Value
I have the utmost respect for Mr. Bobet. He is undboubtedly one the world's top winemakers. This wine proves that right now he is at the top of his game. A spectacular Bordeaux blend with a dizzying purity of expression..
Review by Treasure found (Posted on 20 December 2018)
quest
Value
A GREAT wine. Not good, but GREAT. In 5 years it will peak and become a memorable experience.
Review by Jeeves (Posted on 21 August 2018)
Write a review
This websites use cookies. By continuing to browse the site you are agreeing to our use of cookies.
Accept More information