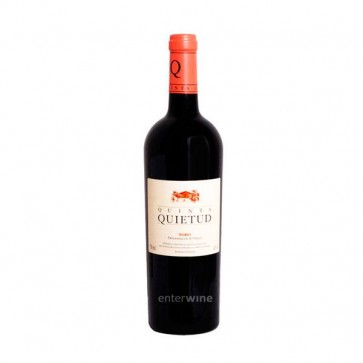 This Spanish organic red wine produced by Bodega Quinta de la Quietud is made from old vines over 80 years of age.

A single varietal Tinta de Toro, Quinta Quietud is produced from vineyards located at an altitude of 700 metres above sea level with yields around 4,000 kg. per hectare.

The soils, which are very poor, are farmed following the principles of organic farming, which includes, among others, decoction of indigenous plants (lavender, nettle) to prevent possible vine diseases.

Harvested by hand, the grapes of Tinta de Toro were selected and brought to the cellar in 20-kg boxes.

Macerated for 15 to 18 days, after the completion of alcoholic fermentation the wine was aged for 20 months in 70% French and 30% American oak barrels. One third were new, one third one-year-old and one third two-year-old.

Drink Quinta Quietud 2014 from Toro over the next 5-7 years.

quientuud
Muscular and big, beginning to loose the baby fat. Give it 2-3 years and it will become totally ripped!! Review by Dino (Posted on 05/06/2018)
Quietud from Toro
A super-Toro. You really smell and taste the terroir. Super intense, rich and very honest. And those aromas of flowers!! Review by Tara and Tino (Posted on 02/09/2017)